When I was writing about Artifactory, I wanted to say it was a two-in-one double combo of history and poetry. Then I thought, people will think I’m an idiot if I say that!

People, that is, who are not in my immediate family. Because this is one of many sayings my family has collected and repeated over the years because they are funny and sometimes even useful.

For example, when you buy a matching set of a cooler and insulated jug which was promoted as a “two-in-one double combo,” how can you not use it whenever talking about any two things that go together? (It’s most effective when spoken in an excited tone of voice while shaking your hands in the air emphatically.) 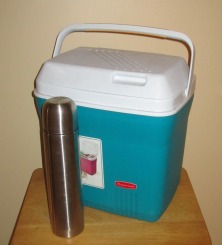 For illustration purposes only. Not THE two-in-one double combo.

I had thought we had lots of sayings from advertisements, signs, and other official sources, but I couldn’t think of any except one I adopted from my husband’s family. I believe it came from a photo processing commercial: “Love doesn’t have to cost much.” It is accompanied by placing one’s hand on top of a loved one’s hand reassuringly. In this house it most often comes up when the dog is placing his paw over a human’s hand/ foot/arm/leg to assert his supremacy.

The phrases come from various other contexts, and they include things overheard as well as things we said ourselves. For many of them, I don’t even really know the origin. Curiously, shopping is a common thread.

My mom and I used to shop for clothes together a lot, and we were so in sync/dorky that once as we walked into a store, we read a sign and then chimed out in unison, “Jumpers—25% off. Ooooh!!” Another time, someone (was I there?) overheard a mother in a store telling her child (possibly while loading up on discount jumpers), “Daddy doesn’t need to know everything.”

Another example of sad family dynamics illustrates the power of older children over their younger brothers and sisters. My parents overheard one child ask an older sibling, “Can I pretend I’m riding your bicycle?”

The two-in-one-double-combo-ness of all of these sayings is that they convey something besides their literal—or tongue-in-cheek—meaning. Like inside jokes, they are secret codes which imply a bond, an understanding, a shared experience or sensibility. It’s one of the comforts of family, or friendship, to have a special, common language.